…actually not till the end of the month, the 26th, but close enough.  When we arrived in the Dordogne last year, spring hadn’t quite arrived.  Here in the south, spring comes a little sooner.   Almond and cherry blossoms are blooming everywhere and while the grape vines are still dark and sort of stunted looking, wildflowers are popping up everywhere.  I’m told it’s still a bit soon for wild asparagus, but it’s been a mild winter and apparently there have been sightings.  Rebecca has promised to take me on a hunt. . .

Not quite six weeks before I fly back to Seattle for a few months and a lot to do in the interim — pack up this apartment, surprising how much I’ve managed to accumulate, and store everything, including the car, in a friend’s garage.  And, my least favorite part of the writing process–continue the search for an agent for the book I’ve finally finished.   There’s also a new project on the horizon.

When I first came to France, I read a book, Under the Ripening Sun, by Patricia Atkinson, who wrote very entertainingly  about what happened when she and her husband left England to buy a vineyard in France and make wine.  Their first effort was vinegar.  And then her husband left her.  And then things got really bad.  I read each night with horrified fascination.  Sometimes I’d  lie awake worrying about her.  One obstacle after another –and her French wasn’t that good either.  I could definitely relate to that.   At times, I couldn’t believe that she didn’t just pack it in, but she didn’t and now, many years later,  she’s won loads of prizes and is practically a godess of wine making. Not only did I admire her tenacity, I also  had a new appreciation for what goes into a bottle of wine.  Living in a wine making village, seeing a bit of the vendange,  also whet my appetite to learn more about the process.

As luck would have it, my new apartment in Laurens is just down the road from the Domaine de Cébene where Brigitte Chevalier has been making  Faugere wine  since 2006.  Yesterday, we had lunch in Damejane, a small café and epicerie Brigitte and a partner started recently in the village of Faugere. 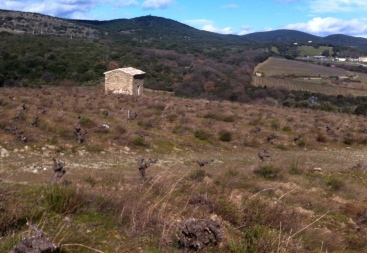 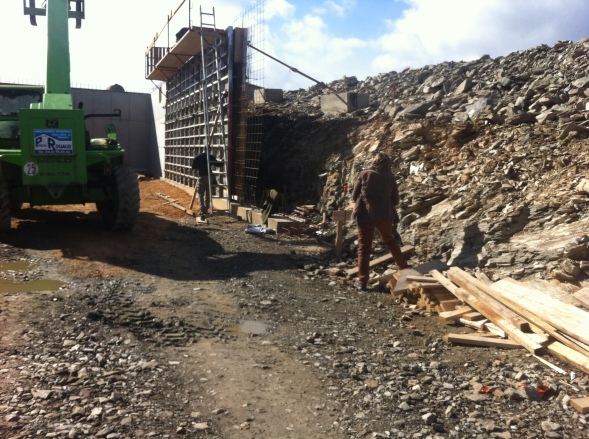 After lunch, we drove through her vineyard, looked at an old stone hut–originally used to  store tools and to give the vintner and his horses some shade from the hot sun.  By the time tourists arrive this summer, it will  be a tasting room.  We also checked out progress on the new cellar to be completed in time for this year’s vendange.  The wind nearly knocking us over, we bent to look at a gnarled and twisted vine that seemed more art than organic.  Carignan vines that the previous owner was going to pull up, Brigitte said.  She convinced him to spare them. “They’re  part of our wine-growing heritage,” she said.  ” I felt it was my duty to save them.”

As I listened to Brigitte talk about the land, the vines, the art of making wine, I was reminded of how it feels when I get together with writing friends. We might moan and complain about agents and editors who don’t appreciate genius when they see it, or the fact that fast food workers make more than most writers, but there’s a passion and enthusiasm,  an obsession, a conviction that despite all the ups and downs, the uncertainties, there really isn’t anything else you could imagine yourself doing.

It all seemed to come together–my own thoughts about the creative process, Brigitte’s sensibilities and, of course, willingness to be involved.  A Year in The Life of a Winemaker  will be a project for my second year in France.   I’ll be back from the States in September, the start of the 2014 vendange and will follow Brigitte’s work and life over the following twelve months.   At the end of it all, we both hope, there will be a book and some bottles of very good wine.

28 fevrier: Went into Montpellier yesterday and saw Grand Hotel Budapest–the ads have been everywhere on my International edition of the New York Times. We’d actually meant to see the Jarmusch(sp) film Only Lovers Left Alive, but walked through the wrong door. My second movie, I think, in France and again I was struck by the absence of the popcorn/soft drink vendors. Absolutely love watching a movie sans crunching and crackling all around. Cheaper too, given the prices of movie snacks. Ticket prices here are similar to the States though
Grand Hotel was quite a romp.
26 fevrier In the wee hours of this morning, I woke to what I thought was a motor bike racing through the village–it isn’t unheard of. A moment later, there was a huge flash of lightning and I realized that what I’d heard was thunder. Today, the sky looks sullen, the vineyards full of black,barren looking vines that, to the uninitiated, (moi) look dead. But all around the village there are signs of life–almond and cherry trees in full blossom– clouds of pink and white everywhere. The photo with the blue sky was taken Sunday, a glorious springlike day, in Minerve, an ancient hillside city with a bloody history going back to the 13th century and the Cathars but which today has some excellent restaurants with great views. I would love to have photographed my food, which looked like a piece of art, but I’ve read that the practice is frowned on. Anyway it was quite delicious. As I write this, the skies have opened up–springtime in the Languedoc?

24 fevrier
I need a big, gloomy emoticon to go with this post. Last week, I began the search for a new agent for the baby (AKA the book) that’s been gestating for the past one hundred and five years, three months and ten days. Finally, I sent it off into the big cruel world to see if anyone might possibly love it. I loved it. Kind of, except that it had started to feel like a kid who is still living at home at 40. Anyway, I’ve been through this process before, many times. I know all the stories about rejection and how you don’t take it personally, everybody gets rejected, blah, blah blah. So the e-mail, an almost instant and depressingly impersonal response, from one of the the agencies I queried shouldn’t really bring on a case of the full-on, paralytic doldrums. But . . . I’m sitting here wanting to rip everything to shreds. I hate my characters, the plot is wimpy, I’ll never understand high concept. And, sorry, I hate my baby. Why do people write? I don’t really want an answer, I just want sympathy and wine. Lots of wine.

On the road with Gladis

Schedule Your Eating for Weight Loss and Wellness

Because There's Never A Perfect Time To Write That Memoir

Writers In The Storm Blog

a pilgrimage of the heart

Living well in the urban village

So Much Food. So Little Time.

Janice Macdonald, A Year In France